EPILEPSY WARNING: This game contains lightning particle effect on the main menu. The screen does not flash, but the effect does flicker at a high framerate. We've decided to play it safe and include this warning. Please click at your own risk.

Rival pizza delivery robots T0DD and J!MMY have to finish one last gig: deliver pizzas to the nebula's local crazy-cat-lady: Patricia. If the pizzas are late, they're free.

Electrical storms have fried the controls of the two delivery ships, however, and each must now work with scrambled controls, and their shoot buttons fire for the rival ship. Both must now work together to reach the end before the timer expires, and the pizza becomes free of charge.

Space Storm Pizza Panic was built in 48 hours for the 2020 GMTK Game Jam.

This game is meant to be played with two players on one keyboard. Due to electrical storms, you and your partner have randomized movement controls that will be shown at the top of the screen in your respective colours. Your fire button will shoot the weapon of the other player, so you'll have to work together to progress, since any collision will send you flying.

To win, make it to Patricia's ship at the top of the screen before time runs out. There's no penalty for running out of time, and you can still complete the game. It just means that the pizza is late, so you'll get the bad ending!

The co-op mode in this theme is great idea but the control is not easy to get used to, specially when the ships disappeared. The animations and sfx are also good and the music is suitable too.

The controls are too weird for me to get into it. 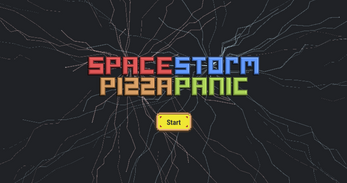